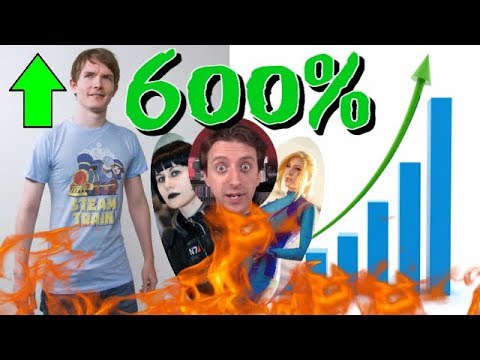 The ProJared drama has slain down upon us by Heidi, and Holly, it’s been entertaining (if a bit gross), and one person has felt the brunt of the pain. Someone who did nothing wrong and was truly a good human being; Ross O’Donovan.
While Ross has asked to be left out of the drama, as he has moved on from this situation, he has stood quite a bit to gain via social media lately.

Via GameGrumps Fandom:
Ross O’ Donovan (born 17 June 1987), also known by internet names RubberRoss, RubberNinja or CondomRoss, is an Aussie animator and friend of the Game Grumps. He is the main host of Steam Train, originally co-hosted alongside Danny. Originally mentioned many times on Game Grumps by Jon and Arin, he made his first physical appearance on the show briefly in “Rocky Road”. He appeared again in the announcement for the ‘Hey I’m Grump’ and ‘Not So Grump’ Tees.

When Ross is mentioned on Game Grumps, it’s usually his accent that’s discussed. Though Ross was born and raised in Perth, Western Australia, and both his parents are Irish, he never developed an entire Australian or Irish accent. He says that his accent is “International”. However, his accent does drop into a slight Australian accent at times; he has stated that he may have consciously toned down his Australian accent once he moved to the United States. On June 25, 2013, the same day as Jon’s departure, Ross began co-hosting a new show on the Game Grumps channel called Steam Train, alongside Danny. This was changed exactly a year later; he remains the main host, while Danny, Arin, Brian, Suzy and Barry are recurring hosts. As of 2017 however, Ross has taken a less active role in Game Grumps-related activities, in order to focus on his art and animation career. He does however appear frequently on the side of the 10 Minute Power Hour set watching the show and has guest starred on the show twice.

Ross’ personality could be described as sadistic because his constant screw ups, this being frequently mentioned by the other Grumps in certain situations. He is also a nice person but this is not normally discussed on camera, his friends only talking about his devilish nature along with his accent.

Ross also has a cat, named Dr. Orpheus, that was stated as “not liking him very much”. This was later debunked in the Skyrim series.

Want to support the show?

Direct donations to the channel:

Background Music Provided By – The Rounds:

Thank you all for watching, commenting, sharing, liking, and of course, subscribing!
-JT

30 thoughts on “ProJared & Holly RUINED Ross's Life, But Not His Career”